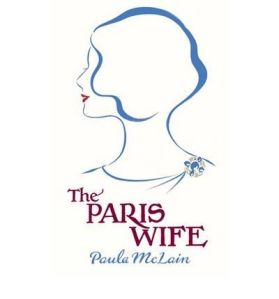 Prior to reading this novel (which was almost impossible to put down), I didn’t know very much about Ernest Hemingway. Years ago I had watched and enjoyed the film In Love and War with Chris O’Donnell and Sandra Bullock which was based on the relationship between Hemingway and his nurse during WWI. Randomly the only other thing I knew was that Hemingway had liked to use a moleskin notebook for his writing – but that was about it. He was one of those on my very long list of authors to read one day. After reading The Paris Wife I’m intrigued and am going to read something of his very soon. I’m hoping I like his writing as much as I liked reading about him.

The Paris Wife is a novel written from the point of view of Hemingway’s first wife Hadley (great name) and is set mostly in Paris during the early years of their marriage when Hemingway was beginning to establish himself as a writer. The time period was the 1920’s, the people they met in the cafes and salons of Paris included F Scott Fitzgerald, Ezra Pound, Ford Maddox and Gertrude Stein. One really fun aspect of the book for me was the ambience Paula McLain recreated and imagining these as then unknown people hanging out drinking, debating, writing and drinking… and drinking… I wonder what their lives would have been like without the alchohol.

As Hadley was the first of Hemingway’s four wives, we know this is not likely to be a story with a happy ending – from Hadley’s point of view at least but there is a real feeling of respect and love between the two of them, even after she has been betrayed and their marriage is sadly ending.

I was so wrapped up in the story that I kept forgetting it wasn’t Hadley herself that had written the book. By chance I saw an interview with Paula McLain on The Book Show immediately after finishing the book. I liked the author, she had obviously done a lot of research and really cared about Hadley’s story.

And what of Hemingway – how is he portrayed? Ambitious, talented, selfish, ruthless, vulnerable, loving, immature, unfaithful, insecure, regretful.

I’m excited by all the follow on reading from here – Hemingway’s thoughts on the same time period are covered in his small book A Moveable Feast, published after his death. His first novel The Sun Also Rises is set around the bullfighting scene in Pamplona, something Hemingway loved and he and Hadley spent several summers enjoying. A Farewell to Arms is a novel set during WWI in the years prior to he and Hadley meeting. For now though it’s F Scott Fitzgerald’s The Great Gatsby which I started this morning.

This was my first read on kindle which was a birthday present from my bethrothed last week. My first experience of reading on the kindle has been a great one, it was my constant companion for several days last week with a lot of screen flicking going on.

This entry was posted in Book reviews. Bookmark the permalink.